Side Effects of Holding onto Resentment 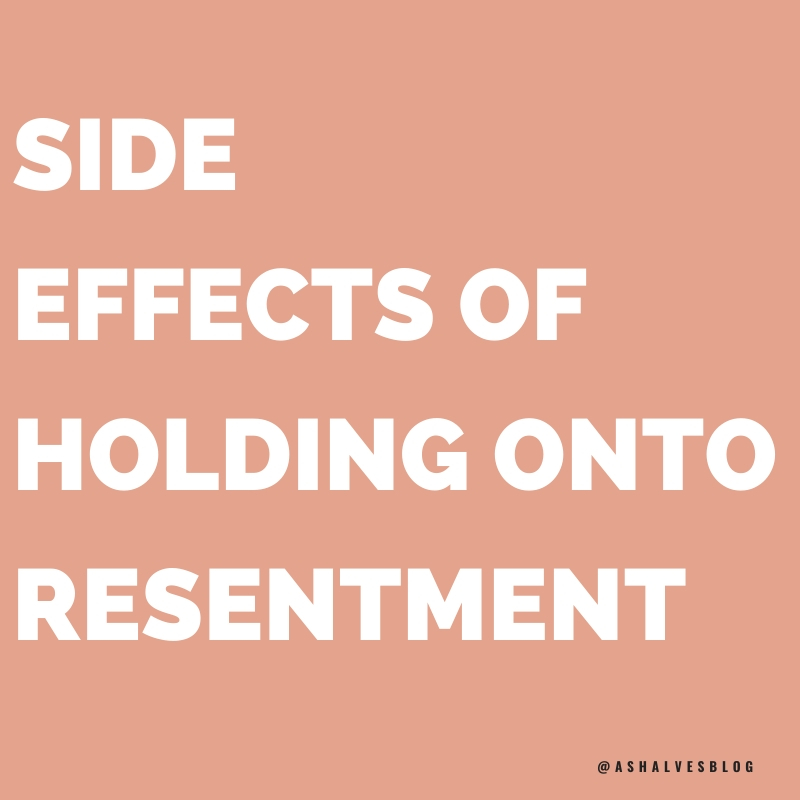 Do you currently feel resentful towards someone? Resentment typically arises when we feel an injustice has been committed towards us. A person who feels resentful may have felt personally attacked and subsequently allowed a grudge to fester. It’s common to hold resentment, however, when left unaddressed over a long period of time, it can become intoxicating and have a negative impact on a persons well being.

Resentment is a mental resistance to, a non-acceptance of, something which has already happened … an emotional rehashing, or re-fighting of some event in the past. You cannot win, because you are attempting to do the impossible–change the past.- Maxwell Maltz

One of the reasons why we hold onto resentment is in hopes that we never forget how they hurt us. We use the pain they inflicted on us as a memo to not get ourselves into a similar situation with that person or others again. Holding a grudge gives us comfort knowing that we never let them off the hook for what they did to us.

Additionally, we may have been accustomed to hold resentment as a tool for survival. Initially, it served the purpose of remembering potential dangers that can harm us. It helped us to create a blueprint in our minds of what to look out for and what not to expect.

It’s okay to mourn the lack of love you received from your parents or being overlooked by people you deeply admired. You don’t need to feel bad for holding a grudge. It’s difficult to forgive people for doing you wrong. When we trust someone and they do us wrong, it can have a huge impact on our ability to let our guard down with that person and others again.

What you Need to know about Resentment:

It hurts you more than it hurts the other person

You forget that people are human and are capable of change

This, of course, doesn’t apply for all cases where you were abused or hurt by others, but in some instances, we hold anger towards people who have the capacity and willingness to change. When we hold resentment towards others, we are holding people hostage to our expectations of how they should and shouldn’t act.

When we focus on what someone else has done to us, we distract ourselves from doing self-introspection. You may need to have an honest conversation with yourself, asking the following questions: Am I still putting these people on a pedestal? Where can I take accountability and ownership for what happened? If it was not my fault (young/ low self-esteem/ vulnerable) then maybe you can ask yourself something like; How can I practice forgiving myself for blaming me for what others did? Be honest about the healing work that needs to be done within you.

Why you must Let Go of Resentment:

You cannot control the behaviour of others

As much as we may try, we can’t control other people’s behaviours. Holding resentment will not change that person. They won’t be shamed into making any changes unless they decide to do that for themselves.

People are simply reflecting their level of consciousness

A Question to You:

Do you hold resentment?

How did you let go of your anger towards someone?

I would love to hear your thoughts

28 responses to “Side Effects of Holding onto Resentment”